Being on shifts has its drawbacks. Stupidly early starts and twelve hour days aren't everyone's cup of tea, and understandably so. But they do have some advantages, and one of those advantages is quite a lot of time off. Four days in every eight in my case.

So I spend my free days playing videogames, watching movies, playing with my dog, or just generally chilling out. And messing about with Raspberry Pi projects of course. Everyone needs a hobby, right?

In my last blog I'd actually built an RPi powered vehicle. I called it G-Bot. It didn't actually do anything, but it looked pretty cool - I thought so anyway. So now the time has come to write some test code and see if I can get this thing to work. 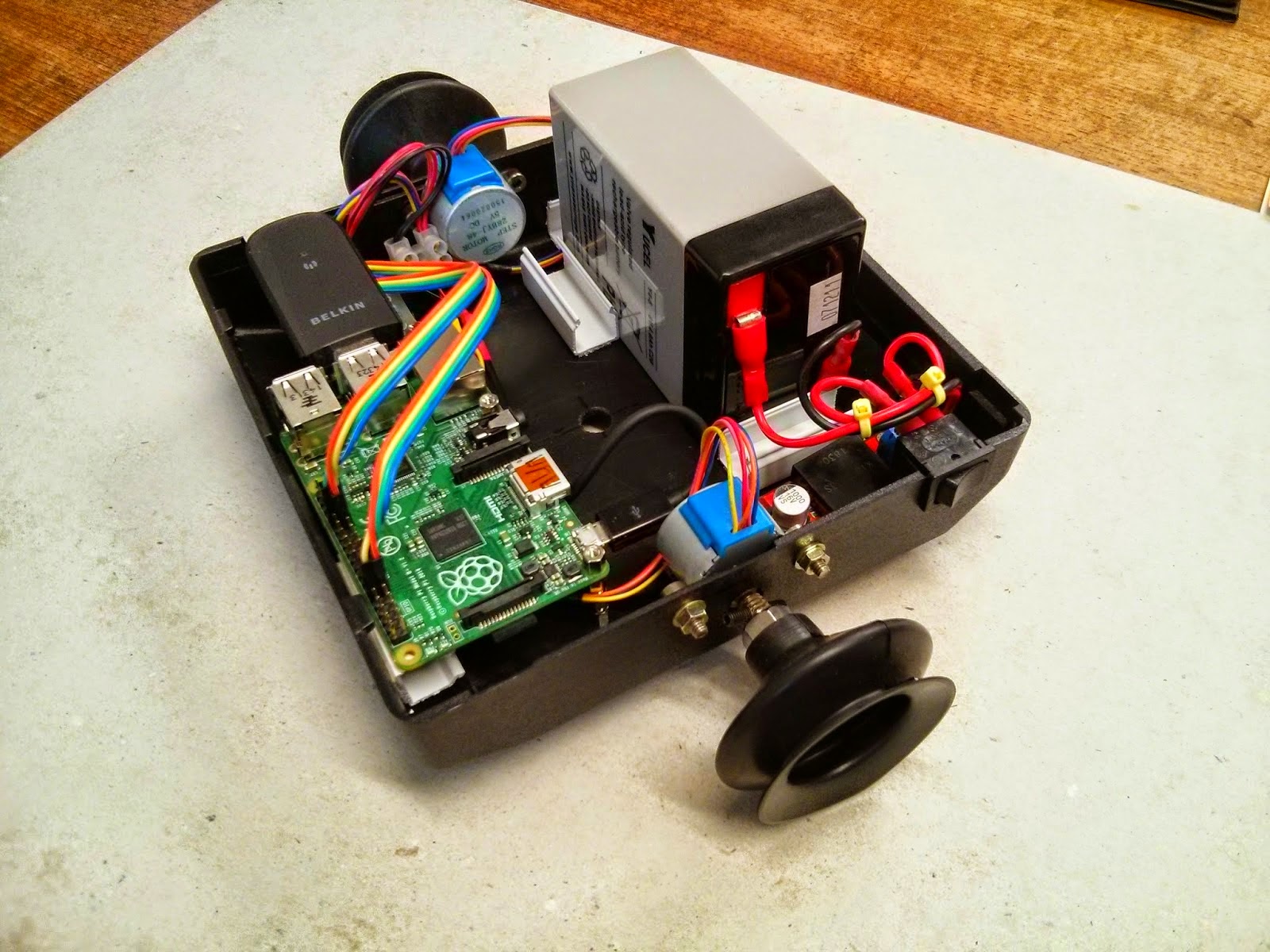 I used some of my existing code just to see if the thing would actually move, and the first thing I found out was that I was right to be worried about the weight of the battery. The bot did indeed move, or try to, but I could hear the stepper motors struggling to shift the mass. It was a combination of a tiny growling sound coming from the motors, and lots of (slow) wheelspin from the "tyres". These are really cheap motors and I wouldn't expect them to take much stick, so first thing on the agenda was to swap out the battery for a lighter power source.

Not having a micro-nuclear reactor to hand, I settled for a couple of AA battery holders from the local Maplins. These take 4 x 1.5 volt batteries each, therefor each pack gives an output of 6 volts. While this in theory would be enough to run the G-Bot, I doubled up to two battery packs because they had nowhere near the amount of Amps available that the larger lead-acid battery had. 12 Volts wasn't a problem because the voltage regulator I'm using allows a very broad input voltage range, as long as it's DC, and still gives 5V at the output. 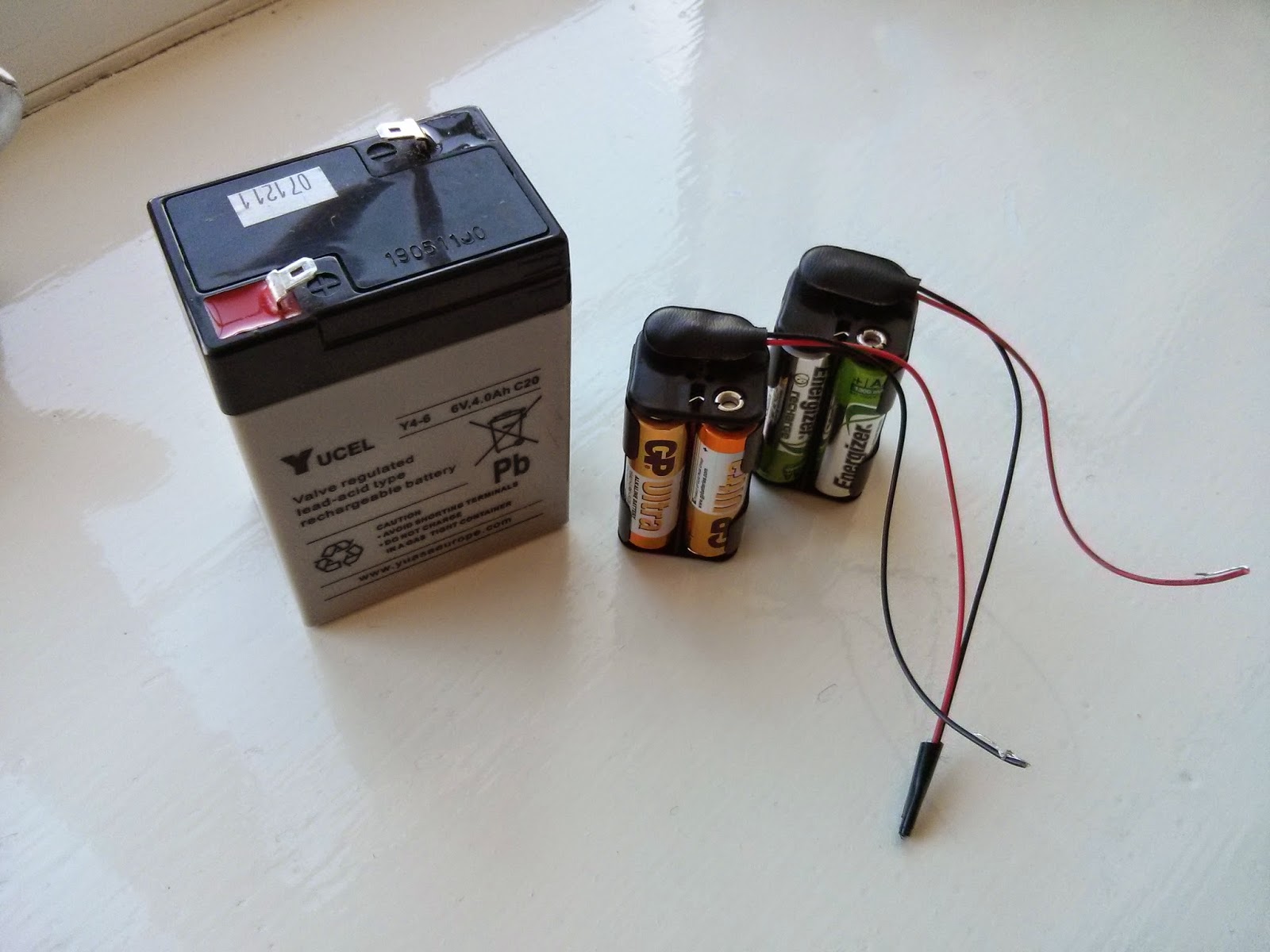 The AA packs combined are less than half the weight of the LA battery.

So with it's new power plant installed, the bot doesn't look quite as neat, but is a lot lighter. I've only bodged the batteries in place temporarily, this is just for a test. Honestly. The battery packs are wired in series, and yes that is electrical tape wrapped around the joint. I'll do a better job once I know this works. 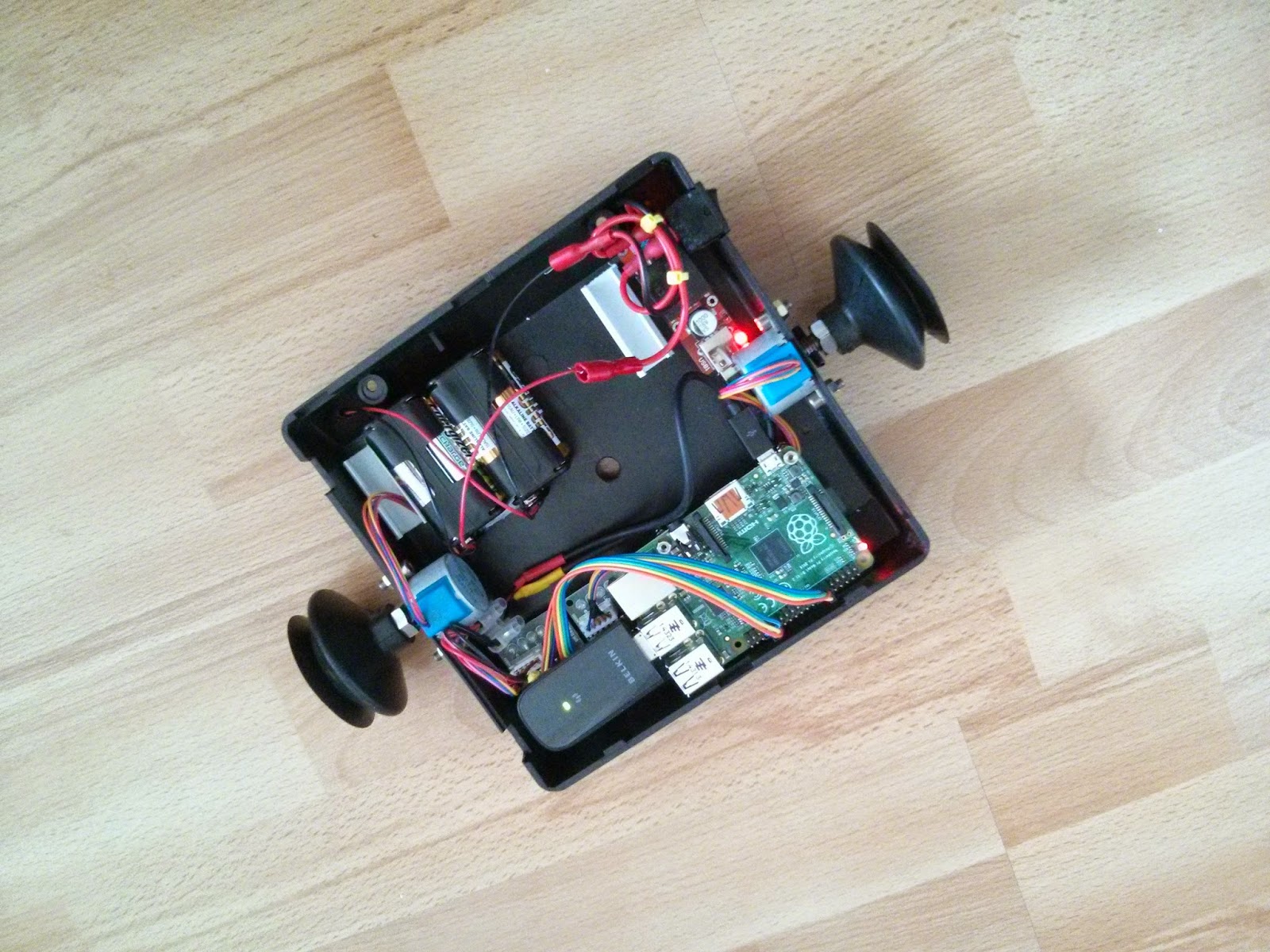 Back to movement testing then! I modified some original code to do a simple straight line test. It basically runs both motors for a time, waits for a second, then runs them in reverse. I also had to reverse the pinout assignment within the code, because the motors are back-to-back now, effectively reversing the rotational direction of one of them in relation to the other. Here's the straight line test code... 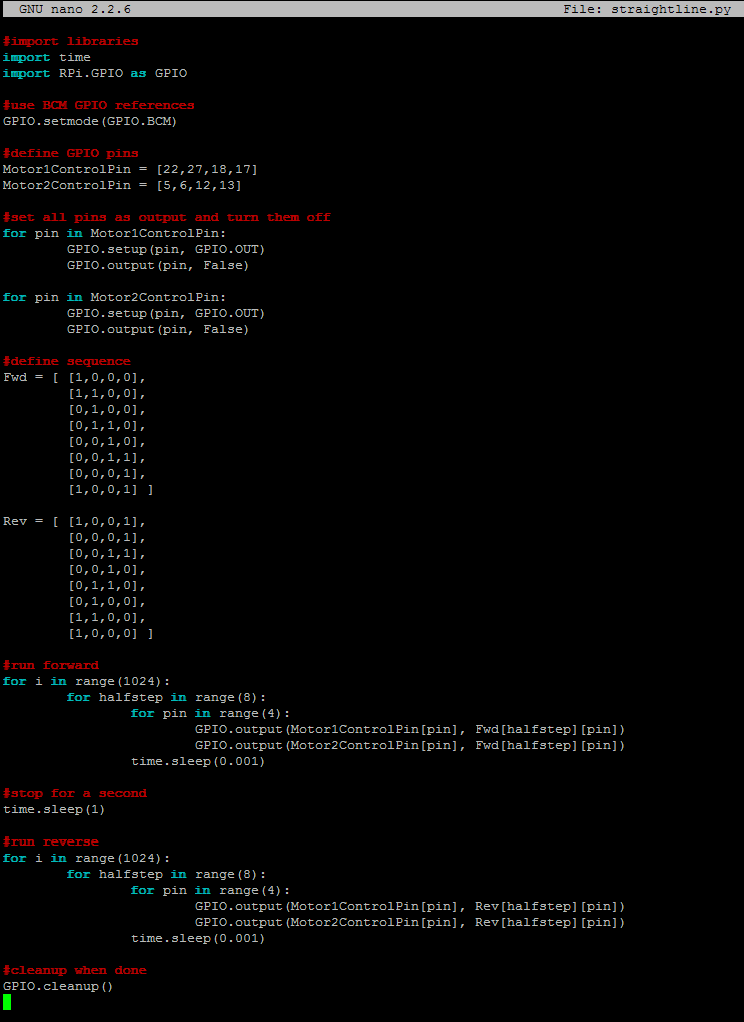 And here's the resulting movement. YES! It moves! I am happy :)

My first ever robot trial. Next stop, global domination.

Inspired by the successful trial, I modified the code to make G-Bot rotate around it's central axis... 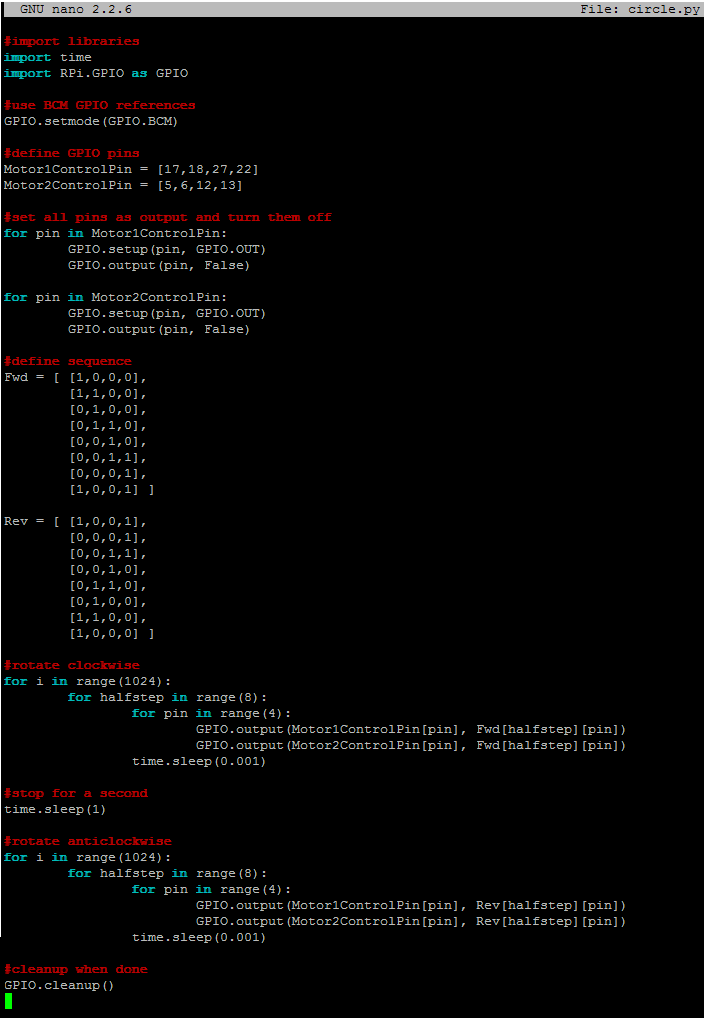 The modification is barely noticeable

This block of code is practically identical to the first one, except that I have put the GPIO pinout assignments back in their original order. As the motors are now mounted facing opposite directions to each other, they effectively run in opposite directions. Here's the result...

From this test, I concluded that four full revolutions of the motor wouldn't result in a 360 degree rotation of the bot. This is due to the diameter of the "tyre" in relation to it's distance from the central point of G-Bot and effect of the opposite wheel turning. Uh-oh, I sense maths are gonna be needed at some point. Not my strong point. I'd rather do some trials for now, and work out the formulas later, or ask someone clever to do it for me :)

Anyway, through trial and error, I found out that the motors need 530 signal pulses to make the bot turn 90 degrees. (Remember 512 pulses makes the wheel do one complete revolution - it's all to do with ratios and crap, it baffles me if I'm honest. But I've promised myself I'll found out about this stuff). I modified the original "quarter turns" program and this is the result...

Not perfect, but close enough for testing

Well that went pretty well I thought. The bot does have a little bit of wheelspin still, but I think I need to shave a little off the skids. That should allow the tyres to have more purchase on the ground. Too much though and G-Bot will be tilting about all over the place.

It's important to remember that while I am sending the start commands from my PC, the code that is actually running the bot is sitting on a MicroSD card in the RPi itself. It's all self-contained on board. In theory anything that can run an SSH client could connect to the bot over WiFi and issue commands. That's pretty impressive considering this whole thing has cost about £40 all-in.

So I'm going to sign off with a video of G-Bot attempting to drive in a square, and land at it's original starting position. Until next time, I bid you farewell.