From output to input...

With my very first hardware experiment completed successfully, I felt compelled to continue... for science!

So having 'mastered' the art of software-to-hardware output, the next logical step for me was hardware-to-software input. This would involve some sort of switch or button, presumably making the PC do something when I pressed it. After many hours of study through ancient tomes of historical text by candlelight (read that last sentence as 'a quick bout of google-fu'), I felt ready to start on my next project - the 'click a button and make something happen' experiment.

As you can see from my awesome graphic skills there, it's quite a simple circuit again. Basically, I'm connecting Pin11 of the RPi (which is GPIO17) to Pin1 (3.3V) through a large resistor. By large I mean high resistance, not physically big. I'll explain why I need the resistor in a minute, but back to the circuit...

You can also see a normally open, momentary switch which leads to Pin6 (Ground) on the RPi. So when the switch is open, it's getting a small voltage to Pin11 from Pin1. But if I push the switch, the circuit is closed and Pin11 is effectively shorted to Pin6 - the Ground. These differing states should be all we need to let the Python program know whether or not the switch has been pressed.

Now back to that resistor. If you can imagine the circuit without that resistor in there for a minute, it's obvious that if I was to press the switch, I would be shorting 3.3V directly to Ground. A dead short. Not really a clever thing to do. So the large (10K) resistor ensures that only the tiniest amount of current is drawn when the switch is pressed, thus protecting the RPi. I hope. 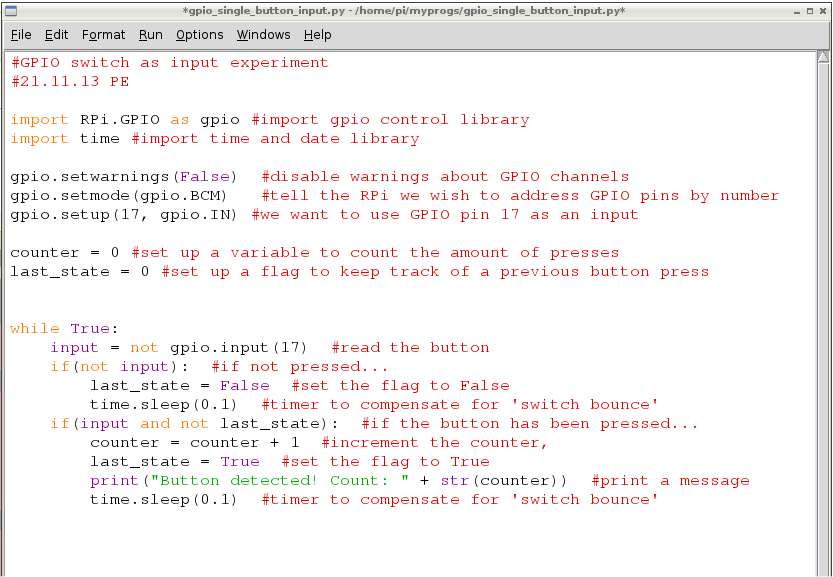 So the code starts with the same lines as last time, basically using existing libraries coded by some clever person somewhere, sometime. Once again, thanks, whoever you are.

I have commented the code to try and explain what each line does. The reason I needed the variable called "last_state" is because the little RPi is so quick that without it, a single button press would be read many times, and that isn't what I was trying to do. Er, how can I explain that?... I wanted to pick up one click of the button, no matter how long I kept my finger on it. Without that variable being used as a flag, holding my finger on the button would cause the program to read it as many, many clicks instead of one long one.

After a bit of tweaking and a cup of tea which seemed to go cold quicker than usual, here is a picture of the resulting output...

Here, have a video, it might make more sense...

So there we have it. Experiment number 2 successfully completed :)

Just one more thing, the technically astute viewer might notice that I have no mouse, keyboard, or video output attached to the RPi now - just power and Ethernet. Well to be honest, I got fed up of having two mice, two keyboards, and a third monitor on my desk (I use two monitors usually), so I am now connecting to the RPi over my local network using SSH. It's like a remote desktop kind of thing, very clever and extremely handy. It also performs very, very well on this tiny little device.

Anyway, I digress. I'm cooking up ideas for experiment number 3 which will no doubt be the marriage of the two experiments completed so far. Probably, a physical input to the RPi, which is read by the Python program, processed in some way, then output physically somehow via the RPi.

It might be time to break out the LED's again, perhaps a different colour this time as I'm feeling adventurous!

Stay tuned for the next epic adventure. Or something.