So in my previous blog, I discovered how to get an external signal into the RPi, and read it via software. The post before that talked about sending a software driven output to external hardware. It stands to reason that this blog post should be about combining the two.

I could just use the external button to turn an LED on and off, but that doesn't really demonstrate the versatility of software to hardware interfacing. In fact, I wouldn't even need software to do that at all, I could do it all with physical wiring. So this project is about creating a 4-bit binary counter, using the button as an increment trigger and 4 separate LED's to indicate the output state, with each LED acting as a single bit in the binary number.

First, a quick rundown on how binary works. In binary, a bit (binary digit) can only be one of two states. Whether you call it "On/Off", "True/False", "One/Zero", it doesn't really matter. The point is you only get two states. This is why binary is usually thought of as Zero's and One's. The first bit (rightmost) of a binary number is "worth" 1 in decimal, the second bit is worth 2, the third is worth 4, the fourth is worth 8 etc.., so with each additional bit, the value is doubling. I've drawn this dodgy table to help explain.. 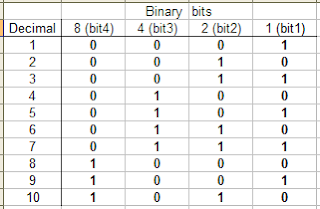 Okay, so you know how binary works now. Sort of. We will need 4 LED's, one to display each binary digit (bit) of our 4-bit number. Here's the circuit diagram, and it's real-world wiring to the RPi. As usual, you can click on it to see the full-size image. 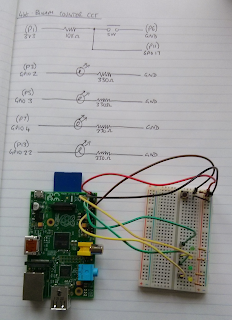 So basically, the button part is exactly the same as what I discussed in the previous blog, and I've just added 4 LED's, wired each of them to a GPIO pin on the RPi, and returned each of them to the Ground (GND) rail through a 330 Ohm resistor. If you remember from a couple of posts back, the resistor is there to protect the 1.7 Volt LED from the 3.3 Volts provided by the RPi. All we need now is some Python code to control our GPIO pins, and I've done this in 3 sections... 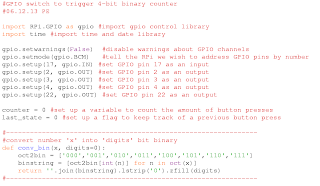 This code just initialises the GPIO pins as an input and multiple outputs, and also has a little function which converts any given decimal number into a binary number with a user-chosen number of bits.

The middle section of code is as follows... 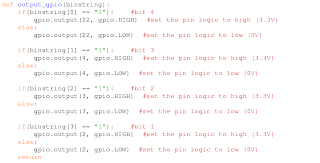 This is the actual meat and potatoes of the program, the bit that does the work. It's basically a modified version of the code from my previous blog, but instead of just detecting the button presses and incrementing a counter, it converts that number to 4-bit binary (using the function I mentioned earlier), then tells the RPi to activate the appropriate GPIO pins as outputs, using the second function. Finally, if the counter exceeds the value 15, it resets it to 0.

So the idea is to show the value of the counter in decimal and binary on the monitor, and at the same time light some LED's on the breadboard, with each LED representing a single bit of our 4-bit binary number. As usual, here's the video of it in action...

For my next project, I want to learn a little more about program flow and function control, but I also want to carry on with the hardware/software interfacing, so I'm thinking of some sort of program where the user is given options, and something happens in the real world depending on the choice they make.

Either way, I'm sure it'll involve flashing lights of some description :)
Posted by Unknown at 11:37 pm